The same notation is used to describe a nuclide. For example, the notation for the most common isotope of helium is

where “2” is the number of protons (directly from the periodic table) and the mass number is “4” indicating this isotope of helium has 2 neutrons. The notation for carbon-14 would be

Protons and neutrons are collectively called nucleons. These subatomic particles are held together by a the very powerful strong nuclear force that is strong over very short distances (about 1 fm) and rapidly decays in strength beyond around 2.5 fm. There is an incredible amount of energy here that holds the nucleus together and is called the nuclear binding energy.

Consider the masses of subatomic particles:

If we wanted to calculate the mass of a helium-4 atom (2 protons, 2 neutrons, and 2 electrons), one might perform the following calculation:

However, careful mass spectrometry measurements indicate that the mass of a helium-4 atom is 4.002602 amu (see NIST), one of the most precisely known masses (see Table 3 in 2003 IUPAC, Pure and Applied Chemistry 75, 683–800). We quickly conclude that the measured mass of a helium-4 atom is lighter than the sum of its parts! This difference between these two masses is called the mass defect (Δm). If we think about this in terms of a typical reaction, we have

to give the following mass defect

There is nothing incorrect with the measured values of the subatomic particles or the mass of the atom. So what is going on? Albert Einstein demonstrated that the mass of an object is directly proportional to its energy and is described using the mass-energy equivalence equation.

We can imagine the formation of the He-4 nucleus to be analogous to that of forming a bond between two atoms. As the subatomic particles come together, the energy of the nucleus drops as it becomes more stable (ΔE is negative). This energy change is associated with the mass defect (the mass that was lost; Δm < 0). The energy given off is equivalent to the mass lost. Let’s look at our He-4 forming nuclear reaction again. Fusing the subatomic particles together causes a loss in mass. This mass is converted into energy.

We can determine the energy of this nuclear reaction per mole of He created using the known mass defect.

When one mole (or approximately 4 grams) of helium-4 is created from its constituent subatomic particles, a staggering 2.73×109 kJ of energy is released. Compare this to Castle Bravo, the largest thermonuclear weapon ever detonated by the US, which had an energy yield of about 15 Megatons of TNT (or about 6×1013 kJ).

Comparison of some nuclear bomb yields

Mass changes can be applied to chemical reactions, though the lost mass is too small to have any non-trivial effect on the properties of the reaction. Consider a chemical reaction such as the combustion of graphite to produce carbon dioxide (Exercise adopted from LibreTexts).

We see that for every mole (12.011 g) of graphite consumed, about a billionth of a gram of mass is lost. This loss of mass for chemical reactions is too small to measure.

Due to the very small energies associated with nuclear reactions on a per atom basis, energy is usually expressed in units of megaelectronvolts (MeV).

For our He-4 nucleus formation reaction above, the mass defect for one helium-4 nucleus is equivalent to 4.535×10–15 kJ released shown here.

Convert this energy from kJ to MeV.

This is equivalent to the nuclear binding energy of the nucleus of a helium-4 atom (i.e. the energy required to split a single He-4 nucleus into its constituent subatomic particles is 28.3 MeV).

We can break this down even more into MeV per nucleon to get the average amount of nuclear binding energy holding a pair of nucleons together in an atomic nucleus. The helium-4 atom has 4 nucleons (2 protons + 2 neutrons).

This MeV/nucleon notation is a measure of the stability of an atomic nucleus. The higher the binding energy (per nucleon), the more stable the nucleus.

We have seen with our helium-4 example that combining subatomic particles to create an atomic nucleus creates (releases) energy due to a loss of mass. Fusion is the process by which nuclei of atoms are fused together to create a heavier nucleus. This can occur when two very fast moving nuclei slam into each other with sufficient energy. These nuclear processes generate a tremendous amount of energy on the macroscale (see Hydrogen Bomb). Light atoms tend to undergo fusion to increase the stability of its nucleus (and release energy in the process). 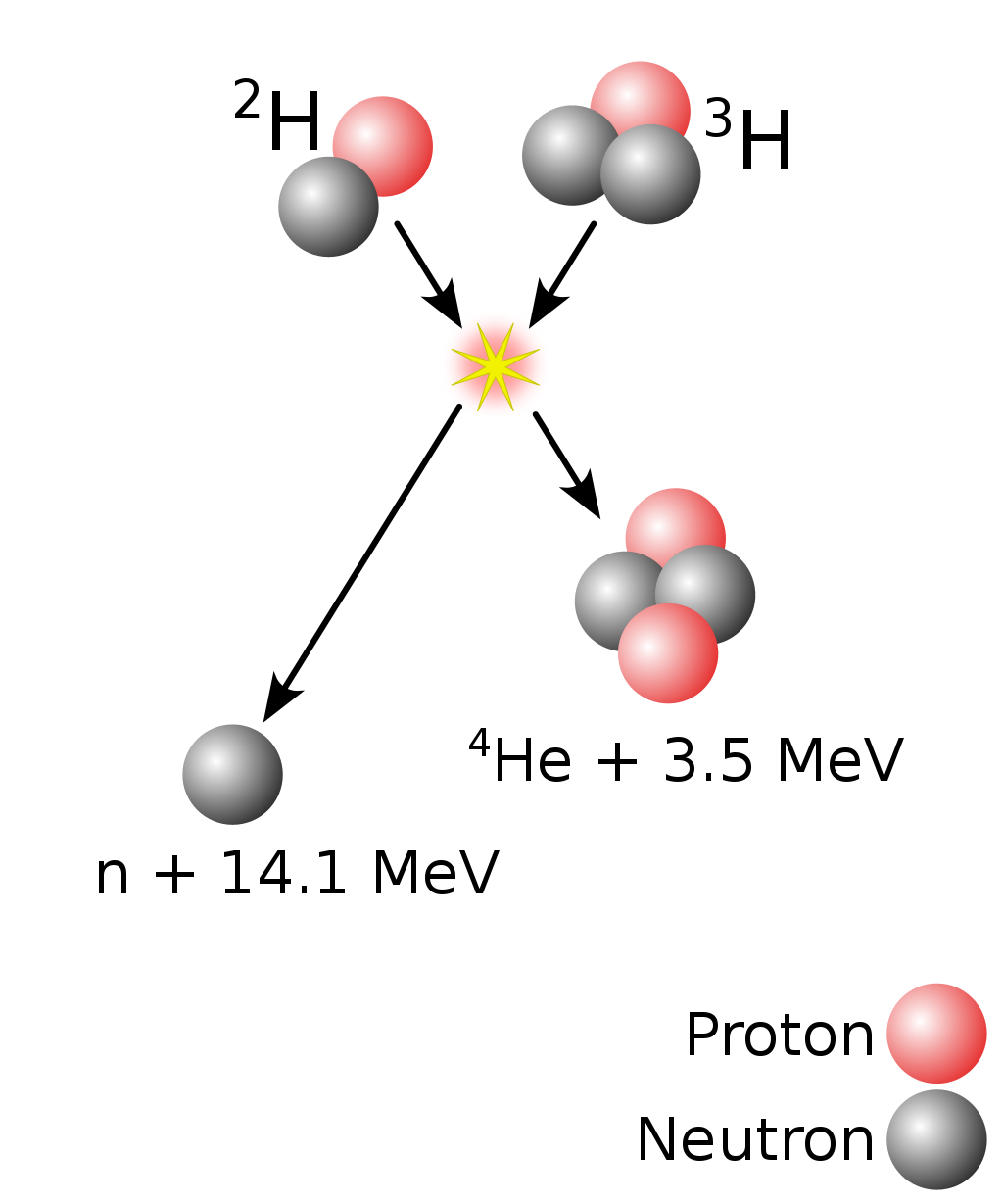 Fusion of deuterium and tritium to create helium-4 and a neutron (Image from Wikipedia).

Fission is the opposite of fusion. It is the nuclear process by which an atomic nucleus is split into smaller, lighter nuclei. Heavy atoms readily undergo fission as their nuclei are rather unstable (higher in energy than they want to be). Energy is released when this process occurs (see Atomic Bomb)

Uranium-238 is unstable and radioactive. It undergoes the following decay process (called an α decay).

The mass defect (Δm) is –0.004584 amu which means that mass is lost and converted to energy. Determine the energy (in kJ and eV) per atom and the energy (in kJ) per mole of uranium-238 decay.

Convert the mass defect from amu to kg.

Energy released per mole of uranium-238

Now we know how much energy is released per atom. Use Avogadro’s number to determine the energy released (in kJ) per mole of uranium-238.